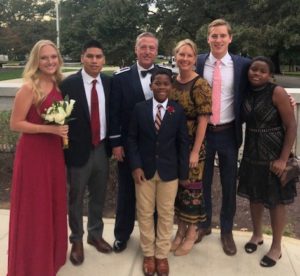 We continue this column with Bob Booth—a person who, along with his wife Gwen and family, have volunteerism in their DNA.

Bob is a Colonel with the Air Force, in which he has served for nearly 25 years. He currently is the Staff Judge Advocate for the Air Force District of Washington, Joint Base Andrews, Maryland. In this capacity, he advises the commander for all Air Force personnel in the National Capital Region as well as 30,000 personnel stationed across the world.  Gwen is Chief Operating Officer and a founding member of LifeStance Health, a behavioral healthcare company that provides outpatient treatment services for those suffering from mental health issues. The Booths have lived all over the country and internationally also, with deployments in Haiti (2010) and Iraq (2006). The family moved in 2015 from Minot, North Dakota into 3412 Hidden River View Road.

Bob and Gwen have five children. Emily (b. 1996) graduated from Spring Hill College with a degree in International Studies nearly a year ago and is the Executive Director of a non-profit she founded in Haiti called Project Fleri. Since the earthquake in 2010, she and her team have been focusing on educational and humanitarian efforts to the St. Jude community. Brandon (b. 1998) recently graduated from Santa Clara University in Finance and is interviewing for merger and acquisition/investment positions in Boston. Maryann (b. 2002) and Louvenson (b. 2008), from Haiti, are students at Saint Mary’s in Annapolis.  Foster son Paco is in California, having recently graduated from Notre Dame de Namur. He is pursuing a career in the Army. The Booths also sponsor a midshipman named Sam, whom Bob says is also part of the family.

“My profession is amazing,” says Bob. “I love what I do, but when I retire on January 1, 2021, I want to help Emily with Project Fleri in Haiti. My military service sparked our service orientation. It’s kind of our passion. Everywhere we’ve gone, we’ve been involved with homeless shelters, food banks, and other missions.”

Bob recently completed a two-year term as President of the Board of Fishing Creek Farm Homeowners Association, but that’s just a piece of the story. His volunteerism started with the Marina Committee (2015 to present). “We always had boats for fishing on lakes, but never have lived ‘the salt life,’ so we wanted to be a part of the marina here,” says Bob. Bob joined Larry Crippen and Mike Williams on the Marina Committee, helping the Co-Chairs as much as he could. Says Bob, “I still go down to help now-Committee Chair Jason Horst and his team, whenever I can, to fix ladders, clean life preservers, and other such things.”

In 2016, Bob joined the CapEx Committee, which was then led by Steve Carroll and Eamonn McGeady. “We saw the need to identify what the community wanted to do and be in the future. I was able to bring my experience as a strategic planner with the Air Force to help the CapEx team help the community to define directions and goals through a survey process. After about a year, Bob left the CapEx Committee in 2017 to join the FCFHOA Board as Vice President, and then served as President in 2018 and 2019.

Bob cites numerous team initiatives completed during his Committee and Board tenures, including the marina renovation and boat house removal (led by Jason Horst with Mike Casio and Bob McGraw), improvement of land use/common areas (see profile of Eric Sprague), and enhancement of the community’s entranceways. “Everybody stepped up and did their part.” He notes the contributions of Barbara and Niels Holch with the entranceways. “This was not a huge financial investment, but it had a big impact on improving the appearance of the community. This was a high-priority goal cited by FCF survey responders,” says Bob.

“The shoreline and path restorations, spearheaded by Eric and Shannon Sprague, have been and will be phenomenal,” describes Bob. “And how we communicate with the community is top notch, and the aspect of our work as a Board team about which I’m most proud. For me, just being a part of it and seeing everybody come together to volunteer their time was what made the commitment both rewarding and worthwhile.”

On Community Involvement and Leadership

Bob understands the challenges of community leadership. “Everybody is not going to be happy all the time, but if we’re communicating and upfront with people, people can disagree, but still have respect for each other. I think we were and are able to do that here in this community,” says Bob.

As far as the time commitment, Bob indicates that Board leadership really isn’t any more time-consuming than any other service opportunity. “You do what you need to do to make things happen. Again, many other people, such as committee chairs and project teams, are doing the work and investing the time. As Board President, I offered help when I could, but in my experience, leadership mostly involves steering the ship,” he comments.

“Being involved in your community is very rewarding and not as time-consuming as many may think,” advises Bob. “You don’t have to be a Board President or Committee Chair. I’d encourage folks to get involved in whatever way they can.”

“I think we’ve accomplished quite a bit in the past years, but there’s still a long way to go, lots to do, and we need help. There always have been people stepping up. That’s what I like about this community. It’s exciting to see initiatives make things better in Fishing Creek Farm. Volunteering is a great way to make good friends in the community, which makes this a better place to live,” concludes Bob.